Seeing the Zodiac Tarot Deck by Lo Scarabeo, I was immediately drawn in—must have been the adorable baby on the box (the Sun). Since this deck is constructed specifically around astrological correspondences, it occurred to me it could be a great crossover deck for astrology fans to learn Tarot, or Tarot fans to learn the cards’ astrological correspondences. Either has the potential to broaden your perspective and thus improve your readings.

The Zodiac Tarot starts from the Golden Dawn‘s correspondences, adding in the modern planets; the Golden Dawn itself was a synthesis of many mystical orders and spiritual traditions; their teachings were basis for the well-known the Rider/Waite and Thoth decks. But while the astrological associations are included in Rider/Waite and other well-known decks, many other traditions are also integrated, making it difficult at times to discern the astrology from the other symbolism. That’s why the astrology connections to some cards can be inconsistent and confusing. The Zodiac Tarot, however, focuses solely on the astrology. Thus, you’ll see both similarities and deviations in focus for individual cards from traditional decks. The astrological interpretations are modern as well, as opposed to the Victorian interpretations that would have been in use by the Golden Dawn in the 19th Century. The suits are Torches (Wands/Fire), Waves (Cups/Water), Clouds (Swords/Air) and Stones (Pentacles/Earth).

The Zodiac Tarot also has a much different feel than other decks, using more modern imagery. Sort of modern, that is. Artwork is reminiscent of the fifties and has a definite charm, depicting home, family, and everyday scenes. Each card has a small icon at the bottom to identify the astrological association.

The illustrations are engaging and evocative. The Devil Card (Capricorn), for example, is illustrated by a prison cell. While the traditional Devil card can (and often is) read as imprisonment, the old school illustration doesn’t give the same immediate understanding  of restriction and consequences as the prison cell image does.

Death is illustrated by a submarine. The Little White Book (LWB) included suggests this: “Death/Scorpio. Place: the Submarine. Death and birth. Secrecy. Deeply hidden feelings. Primal instincts.” Probably a lot less scary to non-readers who see the card come up in a reading.

The LWB includes the history of the deck, how the associations are constructed, and very brief suggested interpretations. While I normally ignore LWBs, in this case, I’d suggest holding on to it, at least until you are sure you can easily identify the planetary and elemental icons. Otherwise, you may find it confusing to identify some of them. It also will clue you in to some symbolism you may have missed, like the time of day indicating whether a card is Cardinal, Mutable or Fixed.

I use this primarily for study and personal development, but have no doubt it would give interesting readings. I would have preferred to have a visual cheat-sheet for the icons, but alas, no such luck. And my old eyes could have used some bigger print in that LWB. But overall, I found this to be a very nicely done deck that has the potential to expand my understanding of astrological correspondences to the Tarot.

Do you combine Astrology with Tarot work? 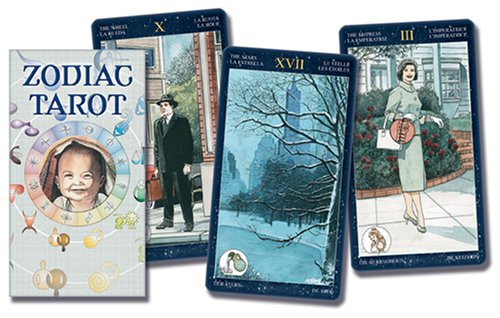